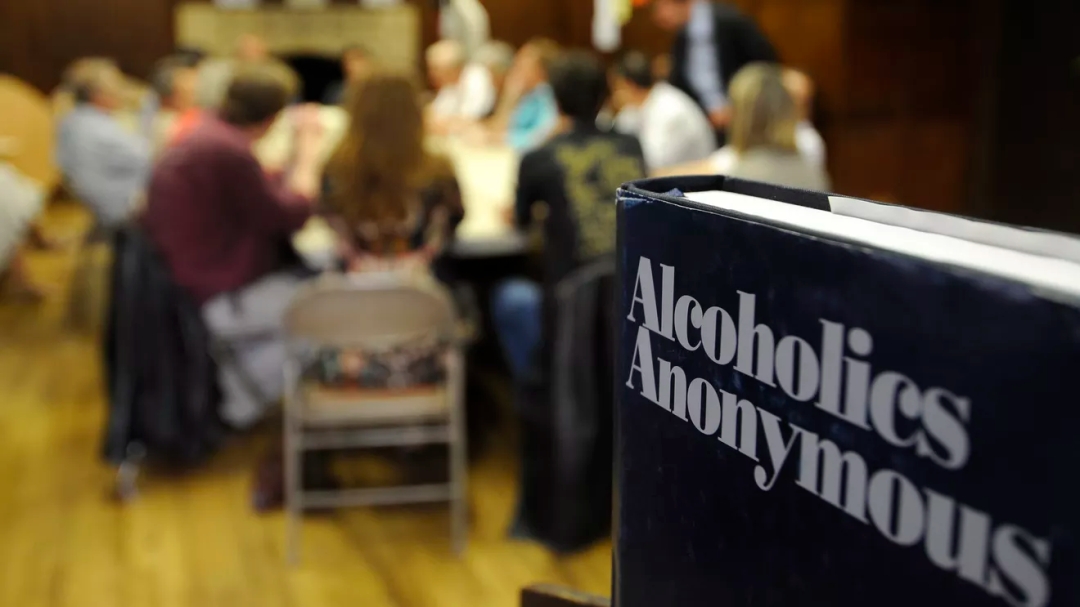 If you are new to the recovery scene or just dipping a little pinky toe into the world via my blog, you may think:

A. AA is the only way to quit drinking
and that..
B. AA is only for “AA people” who have hit “rock bottom” and spend alot of time locked away, isolated and crying and cursing God and avoiding social situations because of all the triggers and probably also..
C. since you aren’t “this bad” and don’t have a rock bottom experience, you don’t warrant AA intervention and so you must, therefore, not be meant to stop drinking.

A=B, B=C, so A=C, right? (actually probably not right as I failed Algebra 3 times and the final time, my grade was verbally relayed to me as “a gift, now get out” from my high school teacher, god bless his heart). These were my perceptions until the last few months, including 2.5 years ago when I attempted to attend my first AA meeting. More on that in a minute.

I know many women I have talked to who have read This Naked Mind or who have gone the Hip Sobriety School route who are prettttty anti-12 step. Whether it’s the having to live “day by day” or labelling themselves a lifelong alcoholic, it just doesn’t seem to resonate with them and their path. I’ve got a foot dipped in each side.. I would say I am not anti-AA but I am anti-“AA as the only way.”

I have actually just recently started attending a local womens’ AA meeting here maybe within the last month or so, and have decided to work the 12 steps – yes, now, at 6 months totally alcohol-free / 99% of the past 12 months alcohol free. I did try to go to 1 meeting about 2.5 years ago, it was co-ed and not in the best part of my town. I was terrified, turned off, it just cemented everything in my brain that said “this isn’t for me, these people arent me” and continued to drink for another year and a half. Because, even though my deepest self knew I was drinking far too much and probably should stop – if this was the ONLY way out, then fuck that. Because I was a gray area drinker – these were the black and white drinkers. Because this meeting held nothing and was of no benefit to me whatsoever. Because some lurky dude gave me a rose at the end because he “always brings a rose and gives it to the person who looks like they need it the most.” I had officially won the award for saddest looking person in an AA meeting (I will tell you I was drunk again before that rose even had time to wither and die, I was back to drinking within the week).

Anyways, I started going to this latest womens’ meeting for a couple reasons. Before the She Recovers retreat, I thought I had it all figured out. I read Annie Grace’s book This Naked Mind, I read a few more, I had it down pat. I did not have an alcohol-free friend base by any means but that let me feel like the expert amongst my peers so I was ok with that. But during the retreat I discovered such connection, something like I have never felt before, and I came home energized, inspired and realized it to be my lifeline… Not just to sobriety but to my deeper self and purpose. So before I even left the retreat I had setup a Meetup group on the meetup app called the San Diego Recovering Womens’ Social Club  – this was near the end of my retreat week about a month ago, and now membership is at over 70 women which just goes to show the great need for this type of connection. During the retreat I also listened in on conversations where women described the sense of community found in womens AA meetings and my interest was picqued. The AA thing didn’t take off as quick as my fun social meetup did, it took me 2 or 3 weeks to finally  come around and go to a meeting, with the support of a few women I’d met through my new meetup.

When I look back on my progression, of that first weird AA meeting a couple years ago to me literally looking forward to this new meeting every week, I realize the hard work I had done “on my own,” reading TNM and journalling and uncovering, had really done something so much more than I realized. I thought “This Naked Mind,” ok, it stripped away all the societal pressures and norms embedded into my brain to get rid of my desire to drink alcohol. But I’m starting to see that a “Naked Mind” is so much more than one that simply doesn’t want to drink – it also stripped away alot of my fear and self-doubt. Whereas I was shaking going to AA a few years ago and remained traumatized for pretty much the entire time since then, I now look forward to going and supporting and feeling supported and even, a little up for the challenge.

What challenge is this, you may ask? Let me explain: I am also working on Gabby Bernstein’s May Cause Miracles (I am on Day 15) and I see alot of step work woven in there. As I like to put it – my drinking was the brush fire I lit to distract myself from the raging forest fire behind it. Once I stopped drinking, the whole world opened up and I am no longer afraid to do or face alot of the things that kept me shaking before, like AA or the things that come up when working the steps. I think that whatever is achieved through “Step work” ultimately finds its way into our lives when we stop drinking one way or another – whether its outrightly thru AA or NA, or through a book like May Cause Miracles. The Steps just provide a nice framework for those of us who aren’t sure where to start, and that’s really all they are; the problem lies in our fear of surrendering our egos, of being guided into discovering possibly ugly and uncomfortable things about ourselves. I am at a point where I’m ready and willing and welcome the discomfort, but in no way would I have been prepared for this right out of the gate and freshly alcohol-free, and definitely not beforehand.

The other reason I started AA and working the steps was I recently decided I think I may want to follow a career path into addictions counselling coupled with my nursing in some way. And again, like I said, I am not anti-AA but rather believe there are many paths to take, many of which don’t involve AA at all. But either way when speaking to clients about their options I would like to come from a place of honesty and true personal experience. I even told my boyfriend, who isn’t alcohol free or in recovery, that I am doing AA more as an “investigative” measure. But when I told him I was just skimming the surface and I’ll work the steps myself, he said no, I have to go all in and fully immerse myself in the experience and the program and he actually convinced me to get a sponsor! Reason #4083479 why he is the amazing rock in my shoe.

So here I am, almost a year since I made that move to quit drinking and I’m just starting AA and the 12 steps and I’m completely thrilled by it all. I am a knowledge and connection junkie, and I leave these meetings energized and exploding with inspiration. To be clear, I certainly cringe at the word “alcoholic” (especially in reference to myself, “Danielle-alcoholic,” but I’ll try to get my ego to take a back seat for this one) – however, this isn’t enough to discredit the entire program. AA has alot of good to offer if we could just get past the stigma of what it means to work a 12-step program. Simultaneously, alternative paths need to get LOUDER and make themselves known as viable resources for people who want to quit but who don’t see a place for themselves in AA.

No matter what your route: take your time, be nice to yourself, find your path, take what works and leave the rest. Sometimes the only thing we can be sure of it what it isn’t or hasn’t been working, and sometimes fear of the unknown is outweighed by the fear of knowing how this story will end if we don’t re-write it.

View all posts by danielle

One thought on “thoughts on AA”

Currently reading:
Untamed by Glennon Doyle
Quit Like a Woman by Holly Whitaker
The Dark Side of the Light Chasers by Debbie Ford

On pause:
Wild by Cheryl Strayed
On Writing by Stephen King
Daring Greatly by Brene Brown
Unbroken Brain by Maia Szalavitz
Insecure in Love by Leslie Becker-Phelps
A Woman’s Way Through the 12-Steps by Stephanie S. Covington
Recovery by Russel Brand
The Universe Has Your Back by Gabrielle Bernstein
Judgement Detox by Gabrielle Bernstein

Up next:
Everything is Figureoutable by Marie Forleo
Girl, Wash Your Face by Rachel Hollis

Done:
The Unexpected Joy of Being Single by Catherine Gray
May Cause Miracles by Gabby Bernstein
Blackout by Sarah Hepola
Alcohol Explained by William Porter
This Naked Mind by Annie Grace
The Little Book of Big Change by Amy Johnson
Dry by Augusten Burroughs
Unf*ck Yourself by Gary John Bishop
The Subtle Art of Not Giving a F*ck by Mark Manson
Kick the Drink..Easily! by Jason Vale
Easy Way to Control Alcohol by Allen Carr
10% Happier by Dan Harris
The Power of Now by Eckhart Tolle
The Unexpected Joy of Being Sober by Catherine Gray
Nothing Good Can Come From This by Kristi Coulter
Digital Minimalism by Cal Newport
The Artist’s Way by Julia Cameron